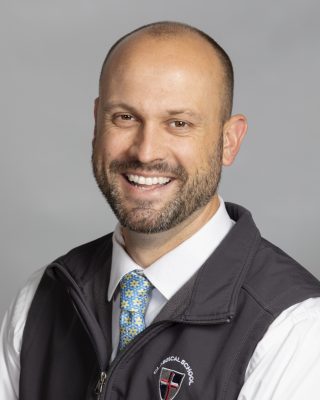 Mr. Josh Dyson is the Headmaster at CSW. Prior to assuming this role at CSW, Mr. Dyson served as CSW’s Director of Operations. Before coming to CSW, he served as the Chaplain at Houston’s First Baptist Academy where he also taught Bible and Latin.

Mr. Dyson and his wife, Julie, have four children — Deacon, Noelle, Daisy and Lucy. The Dysons also claim two, four-legged, furry children who answer to the names Hollie and Rocky.

Mr. Dyson began his career in education as a teacher, and though he spends much of his time in his administrative role, he continues to teach Rhetoric to our seniors, helping prepare them for their final thesis at CSW.

In all his interactions with students, he encourages them to behave as leaders, emphasizing the importance of being first in line for those tasks no one wants to complete, being last in line when everyone wants to be at the front and treating others as Christ would treat them.

In his personal life, he says is inspired by “unexpected reminders of the simplicity of life — God’s calling upon our lives to love mercy, do justice and walk humbly with the Lord.”

“There is no more important work than the training of covenant children to embrace their identity as children of the King and ambassadors of the Kingdom,” he said.