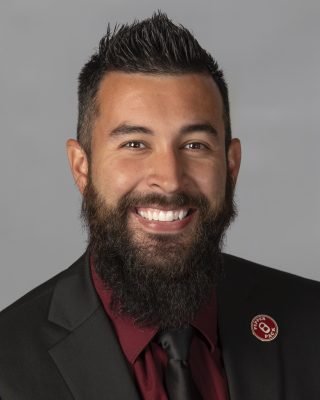 Mr. Bowman has a Bachelor of Science in Christian School Elementary Education, with a Minor in Bible from Barclay College.

Mr. Bowman and his wife, Shelby, have a daughter, Nya. They also have a dog, Rae, who likes to take the family on walks. Their family attends Hope Church.

Growing up, Mr. Bowman’s mother ran a home daycare and the family was deeply involved in their church. Through both of these experiences, Mr. Bowman developed an appreciation for the joy children find in the little things of life and the confidence they have in themselves when the world is still their playground. “If I can have a part in adding to their lives, helping them overcome obstacles that once seemed impossible, and then getting the privilege to point all the credit back to God, there really isn’t anything else I could imagine doing with my life,” he says.

Mr. Bowman is inspired by the disbelief or doubt of others, daring to tackle the seemingly impossible. Furthermore, he strives to bring a smile and a laugh to those around him. With that said, here are a few of Mr. Bowman’s quirks: He survived a car crash followed by a coma in 2005 — an event he affectionately dubbed his “17 day nap” — and he is a self-proclaimed world’s largest consumer of Dr. Pepper. He also is passionate about soccer, movies and sock monkeys. As an “expert” FIFA player, he anxiously awaits new challengers.